There are few riders in endurance that will achieve what Dolly Decair has.  A true legend and pioneer in the sport of endurance racing, Dolly defines the very best of the sport.  While always keeping the welfare of her horse as her #1 priority, she has amassed an incredible record.  Dolly's stallions Wazir’s Karahty, and his sons have set records that few stallions will ever match.

What to do on a rainy SoCal day....? I decided to call my friend Dolly Decair who just happened to turn 78 years old and that means that she was 44 years old when I first met her at a SoCal endurance ride 34 years ago! She was known as the wild and crazy girl who rode fast on a stallion and won most of the time.

There were three things that immediately intrigued me about Dolly way back then. First and foremost , I thought that she had the most magnificent stallion. He was a tall, handsome and powerful looking horse that seemed a bit arrogant and self assured like no other horse that I'd ever seen on an endurance ride. His name was Wazir's Karahty and he was a copper colored Chestnut with a long mane and tail and he was built to run.

Secondly, when I found out who his owner was...this small woman named "Dolly" with platinum blond hair, long painted fingernails, who wore bright red spandex riding pants and most outstanding of all, she wore a big beautiful smile and had a visible hyper energy that surrounded her. Dolly also wore a really cool looking red helmet and in those days not many riders were wearing helmets let alone ones like what she had on, which in my mind looked more like a bucket than a helmet.

I was a teenager at that time and I was a little shy and felt awkward and didn't really know how to go over to her camp and introduce myself but I knew that I wanted to know her. I've always been attracted to people who are different and especially to people who have their own sense of style and attitude.

When Dolly first pulled in to the ridecamp, I heard the locals gossiping and griping about who she was and how she rode a crazy stallion and that she rode way too fast. Dolly definitely stood out in her bright colored attire with her amazing horse. She rode in the finest saddle and seemed to carry a lot of pomp and pageantry. We had our own set of local SoCal endurance riders that were the consistent winners, but this Dolly gal was an outsider and the rumors were just as colorful as she was.

At some point in the day prior to the ride, I managed to get up enough nerve to talk to her husband who was setting up their camp while Dolly took care of her horse. His name was Bill and I could remember that he showed an adoration for both his wife and the stallion that she rode. He was very kind, calm and friendly and I immediately took a liking to him.

The next day Dolly won that ride and I got to see her for a few brief seconds on the trail as she and her horse thundered by us as if we were standing still. I'll never forget the energy I felt from their presence; it was powerful. I recall thinking that they could have swept me and my horse off the trail and sucked us into their tailwind as it was that strong.

If you look at Dolly's AERC record, you will see that she often finishes in the top 10 and with many wins and awards for Best Conditioned horse. I think her recorded career mileage starting in 1985 tops 7,500 miles.

Her story is quite unique in that she and her husband Bill lived in a small bungalow at a boarding facility in Tevis country near Forest Hill, CA. She moved in right across the street from Virl Norton who is an endurance legend himself and she began riding horses for other people and she had a liking for riding stallions. Dolly's husband Bill was very involved in supporting his wife and wanting to buy her the best horse possible that would be a great endurance horse. They were financially limited but on their 3rd year wedding anniversary, he bought her a Palomino for $700. Dolly trained and conditioned diligently and they won their first 100 miler at Quicksilver and went on to finish the Tevis 100 miler. Even though they had done well on several other rides, this horse was not an Arab and so he had respiration issues where his heart rate would drop quickly during competition but he had a hard time meeting criteria. Skip Lightfoot (another longtime endurance rider) came along and offered her $3000 for him and so she sold him. She felt sad but knew that Skip would take good care of him. She sent him off along with his winning 100 mile halter and blanket and then she went home and cried her eyes out. The next day when she went out to the barn, she found the horse standing there waiting for his afternoon feeding. He had broke away from his new home and ran through the streets back to her place just in time for lunch.

During this time, Bill & Dolly had their eye on a stallion named Wazir's Karahty who was 5yo when they eventually purchased him and he had already completed a few endurance rides. The guy that sold him to her said "I know you'll ride the piss out of him" meaning that the horse had a lot of go and he needed someone to let him achieve his potential.

Wazir's Karahty and Dolly had a great love affair and they rode with no fear. Dolly would always say that her stallion didn't have a mean bone in his body and he loved to race and he loved to win. He would cross the finish line and toss his head and snort it up with all his well deserved arrogance. During his racing career, he had 30 wins, 21 Best Conditions and finished 54 out of 55 races.

Being a top rider in endurance is not always an easy position and Dolly endured more than her fair share of critics whom made a lot of untrue statements and hurtful rumors that simply were not nice but her husband was her staunchest fan and he liked to see her win and he reminded her that they were not there for fun or to earn the Ms Congeniality award. He expected her to stay focused and ride her own ride. If she got distracted, he'd remind her that it was a race and not a social hour. He crewed hard for her and took great care of them often in the middle of nowhere and under less than pleasant conditions.

Dolly couldn't afford to travel all over and accumulate endurance miles so her objective was to do well and build a great record for her stallion, sell some breedings to support her endurance career and eventually keep a few of his babies.

Dolly believes that the beauty of riding endurance is that there's a place for everyone and that we shouldn't be knocking others. She sadly lost her husband to cancer and she struggles with his absence. She still own's one of Wazir's Karahty's sons that she bred and his name is Karahty's Karbon Kopy. She says that at her age it's difficult to get out there and ride hard like she used too and without her husband's support and crewing there is a void, but she's still at it and last year alone they completed three 50 milers and all finishing in the top ten. Not bad for a young 80-year-old blond who still has a wicked sense of humor and many wonderful endurance tales that are too numerous to mention here.

Thanks Dolly... I wish you many more miles of success and may you continue to be blessed with the ability to make others laugh and strive for greatness just like you have done. 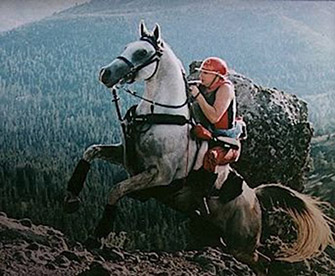 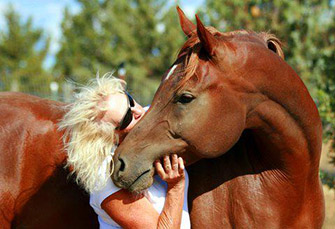 Don't miss your opportunity to become part of this extraordinary endurance legacy. Karahty's Karbon Kopy is standing at stud in Terrebonne, Or. Call for more information. (541)316-3434

Click here to read this wonderful interview with Dolly in Trail Blazer Magazine.